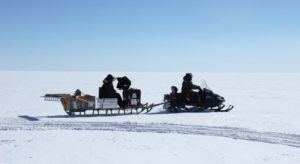 New, detailed study of the Renland Ice Cap offers the possibility of modelling other smaller ice caps and glaciers with significantly greater accuracy than hitherto. The study combined airborne radar data to determine the thickness of the ice cap with on-site measurements of the thickness of the ice cap and satellite data. Researchers from the Niels Bohr Institute – University of Copenhagen gathered the data from the ice cap in 2015, and this work has now come to fruition in the form of more exact predictions of local climate conditions.

Researchers from ice2ice Physics of Ice, Climate and Earth (PICE) at the Niels Bohr Institute, University of Copenhagen, have succeeded in making a method to enlighten an otherwise dark period in climate history. Working with the ice core ReCap, drilled close to the coast in East Greenland, postdoc Marius Simonsen wondered why the dust particles from the interglacial period – the warmer period of time between the ice ages – were several times bigger than the dust particles from the ice age. His research led to the invention of a method able to map the advancement of the glaciers in cold periods and the melting in warmer periods. This data is important for the climate models we use to predict sea level rise. The result is now published in Nature Communications.

Based on the hypothesis that the bigger dust particles in the ice couldn’t have come from afar, the then PhD student, Marius Simonsen, examined the dust at select locations on the coast of East Greenland close to the drill site. The chemical composition turned out to be similar to the larger particles in the ice. The smaller particles of dust caught in the ice, on the other hand, travel from Asia, blown to Greenland by dust storms. In other words, the bigger particles of dust in the ice must mean presence of bare land close to the drill site. The ice is composed of annual layers, like the growth rings in a tree, so the distribution of large and small dust particles can be linked to the advancement and melting of the ice. Large particles mean bare land in the vicinity, small particles mean the land is covered in ice. The end of the ice age, where the ice cap is receding, is well explained scientifically, Marius Simonsen explains. “But it is very difficult to retrieve data on the period before the ice age. The ice is an extremely strong natural force, so it grinds away everything when advancing. But with the new method, we have data on the advancement of the ice. All of a sudden, we have a link to information on how quickly we enter an ice age, in a way we never used to have”.

It is important to know more about how glaciers react to changes in the atmosphere, and rather a lot is known on the composition of the atmosphere during the ice age. The results from the new method can now be used to compare the reaction in the masses of ice to changes in the atmospheric content of greenhouse gasses like CO2. Marius Simonsen says: “The glaciers receded at the beginning of the present interglacial, just like they do today because of climate change. The two scenarios are not entirely comparable, because there was much more inland ice then than now by the coast in East Greenland where the ice core is drilled. Never the less, the results are very interesting indeed when making climate models, because the models must be tested by comparison to reality. And in the new method we’ve acquired an anchor point in a period about which not much scientific knowledge existed”. The method helps putting constraints on our knowledge on the influence of greenhouse gasses on ice melting and, consequently, sea level.

Helle Astrid Kjær, Assistant professor in PICE, says the objective of PICE now is to utilize the new method at other locations so we can gather more data on the changes of glaciers in the past. The researchers are already planning new drill sites in North East Greenland and Canada. It is very likely that advancement and melting of the ice there is different from East Greenland. “Perhaps, with the new method, we are able to see how fast the ice age came in from the north and moved south”, Helle Astrid Kjær says.

It is a precondition for the feasibility of the method that bare land exists in the vicinity of the drill site, so dust particles can be found. This was the case during the last interglacial as the temperature then, app. 115,000 years ago, was up to 8 degrees C. warmer than today, according to a former study from the Niels Bohr Institute. Hence, the method will most likely be usable in North East Greenland and Canada. The researchers at the Niels Bohr Institute are already establishing new collaborations with Canadian researchers based on the new method.

A new ice2ice paper co-authored by ice2ice researchers Ruth Mottram and Peter Langen from DMI documents how solid ice lenses formed as a result of melt have increased the runoff area in Greenland  by 26% since 2001. The study is published in Nature.

Although runoff from ice slabs has added less than a millimeter to global sea levels so far, this contribution will grow substantially as ice slabs continue to expand in a warming climate.

Such melt episodes are becoming increasingly common in Greenland: In July of 2012, snow and ice melted from 97 percent of Greenland’s ice sheet surface, an event not seen in the 33-year satellite record.

ice2ice researcher and expert in ice dynamics, Ruth Mottram states that “So far the increased melt water from the ice sheet has contributed just 1 cm to the global sea level in the last 15 years. However from the new study we observe that surface melt, which contributes to the sea level, will increase significantly. And that is really unfortunate for the icecaps ability to contain mass”

The process of refreezing melt water has so far not been well implemented in climate models, but with research from ice2ice and DMI the process is now better constrained also in the models allowing for more correct estimates of future sea level changes.

The study was a collaboration between ice2ice partner the Danish Meteorological Institute (DMI) and partners from the danish geological surveys, university of Colorado, the national snow and data centre (NSIDC) and University of Freiburg. You can read the full paper here 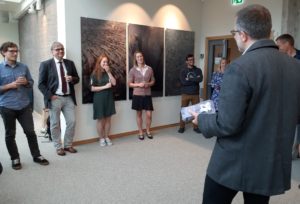 Supervisor Kerim Niscancioglu giving a speech at the celebration of Dr. Nora Loose.

Yet another Ice2ice PhD defended her thesis today! We want to congratulate Dr. Loose with her important contributions to the understanding of the climate system in the Subpolar North Atlantic.

If you want to read more about her work, here is a summary of her work published on the Bjerknes webpage today.

In the PhD she investigated the sensitivity of the climate to changes in the Arctic sea ice using an atmosphere-ocean coupled climate model. Ida has found that Barents-Kara sea ice loss might be linked to a weak cooling over parts of Europe in winter only present for the temporal mean winter temperatures. However the coldest winters did not show a statistically significant cooling over Europe for any amount of sea ice loss in the Barents-Kara Seas.

She also used the warm RCP8.5 scenario to look at sea ice loss in the period 1850-3200 and found that the Arctic transitioned from having a perennial sea ice cover to an ice-free Arctic Ocean. The loss of the Arctic sea ice appeared to lead to a shift in trends for some key parameters such as the precipitation variability which increased and the Atlantic Meriodional Ocean Circulation which stabilized after an initial reduction as well as a change in the Arctic Ocean stratification which strengthened.

Ida was supervised by:

and in the assesment committee was: 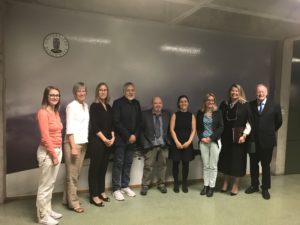 You can read more about the thesis here, unfortunately only in Norwegian.

The three students have all been working with chemical ice core proxies, but on very different timescales.

Mirjam Läderach has worked on “Continuous flow analysis on EastGRIP ice core: Optimization of optical dye method and results from acidity measurements on the EastGRIP ice core” where she successfully optimized an acid method for the determination of volcanoes in ice cores.

Michelle Shu-Ting Lee worked on “Climate proxies based on the NEEM ice core for the Holocene period 4000-7000 years B2K: An integrated CFA and IEC method for NEEM brittle zone”. The brittle zone is a zone in deep ice cores where continuous chemical sampling by CFA is not possible and thus time consuming discrete sampling combined with Ion Chromatography is required to obtain the chemical proxies for forest fire, volcanoes, wind and aridity.

And Nicholas Robles worked on “Spatial and Temporal Analysis of Greenland Shallow Snow Cores and HIRHAM5 Data”. He analysed the variability in several shallow snow cores covering only the past 5 years and compared the chemical results with weather data from climate modelling to generate a better understanding of the chemical proxies we use for the deep ice cores.

END_OF_DOCUMENT_TOKEN_TO_BE_REPLACED

The Olav Thon Foundation recently announced the recipients of awards and financial support for research and teaching. Two ice2ice scientists from Bergen, Kerim Nisancioglu and Anne-Katrine Faber were awarded 1.5 mio NOK to their project “IceFinse – a field course on Arctic climate with focus on engaging students in research”. 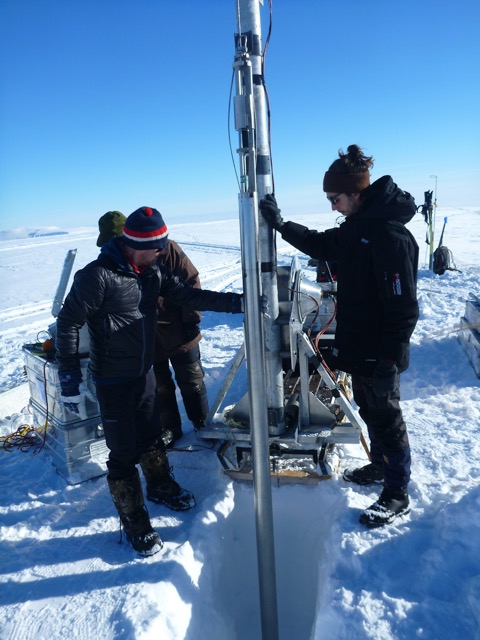 The project aims to give Master level students first hand experience with Arctic research and fieldwork.  This course offer opportunities for learning that is not achieved in classical curriculum-based classes.  By giving students insight into  all steps of the research process, from formulation of a research question, to data collection and analysis and interpretation the course aims to engage students in research and prepare them to start working on their master thesis. This research-based field course on glaciology, ice cores and climate will be designed around the lecturers existing research. The studentdriven fieldwork and research projects will therefore contribute to ongoing research. 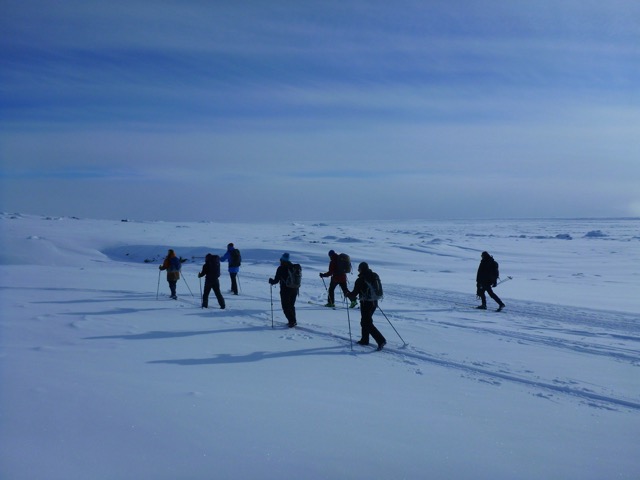 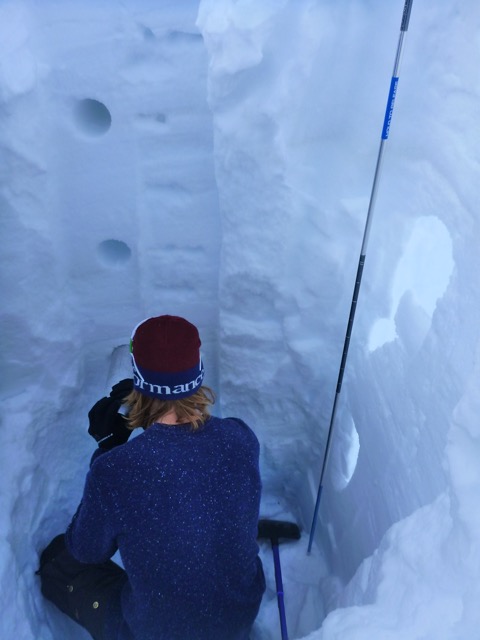 The scientists officially received the financial support for their project at a  ceremony in Oslo on March 7th.

Andreas Plach successfully defended his thesis at the University of Bergen 5th March. The thesis is entitled “Simulation of the Eemian Greenland ice sheet“. 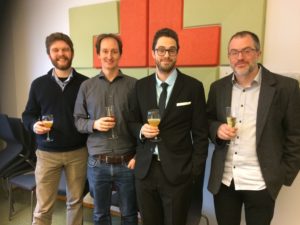 You can read more about the thesis here, unfortunately only in Norwegian.