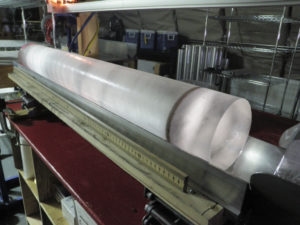 In the climate system, like the ecosystem, everything is connected. Arctic terns migrate each year from their Arctic breeding grounds to the Antarctic coast. Our recent paper in Nature shows that a similar 50,000 km journey is made by abrupt Dansgaard-Oeschger (DO) climate change events.

The speed at which the southern temperature and wind changes occur implies that, like the terns, they make their way to Antarctica through the atmosphere. The rapid atmospheric changes are superimposed on more gradual (and already well-documented) changes in Antarctic temperature that appear around 200 years later and that are attributed to changes in ocean heat transport and mixing.

To stretch the bird analogy, the terns return north after their foray in the Antarctic sea ice, and similarly Antarctica is not the last stop for the DO signal. The next step is to test whether the wind changes are an important component in driving the next DO event, e.g. through their effects on the overturning circulation, air-sea carbon fluxes and sea ice.

Why the southern westerlies shift with the DO events is not yet fully understood, but model studies suggest a plausible chain of events that matches observations (see our ice2ice paper from earlier this year on this topic): abrupt warming in the Arctic means that the thermal equator is displaced north and the SH Hadley cell strengthens; the stronger SH Hadley cell redistributes energy back into the cooler southern hemisphere, in turn strengthening the sub-tropical jet and drawing the westerlies northward. The resulting Antarctic temperature changes are consistent with the observed influence of the Southern Annular Mode on Antarctic climate, suggesting similar atmospheric dynamics may be involved.

In its details, our study examined ice cores from five different locations around Antarctica and synchronized their dating internally using layers of volcanic ash. Changes in the temperature and in the source regions of Antarctic snowfall were then analysed by looking at water isotope ratios. Credit is due to Christo Buizert (OSU) who led the study and to Bradley Markle, who published similar findings in 2017 that were restricted to the Pacific sector of Antarctica.