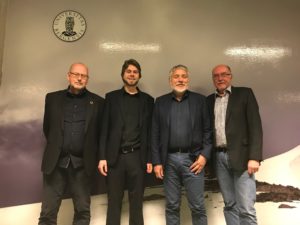 Henrik Sadatzki successfully defended his thesis for the PhD degree at the University of Bergen. The thesis is entitled: “Sea ice variability in the Nordic Seas over Dansgaard–Oeschger climate cycles during the last glacial – A biomarker approach”

The last glacial period (ca. 10,000–100,000 years ago) was marked by repeated abrupt climate changes that had global implications. It is known from ice core records from the Greenland Ice Sheet that these glacial climate fluctuations comprised temperature shifts of up to 15°C over the Greenland ice sheet, happening within years or decades. These are the most prominent abrupt climate changes that we have recorded. While the underlying mechanisms of these so-called Dansgaard–Oeschger climate events are not yet fully understood, it is believed that changes in sea ice cover and ocean circulation in the Nordic Seas have played a key role in driving these enigmatic events.

In his studies, Sadatzki investigated the nature, timing and role of changes in sea ice cover in the Nordic Seas during several abrupt Dansgaard–Oeschger climate events ca. 30,000–40,000 years ago. For this purpose, he extracted and analyzed specific organic molecules from marine sediments, which were produced by certain sea ice algae and other phytoplankton thousands of years ago.

Sadatzki´s thesis documents sea-ice changes with an unprecedented detail, and show that in cold phases the sea ice cover was much more extended than today. The sea ice cover abruptly disappeared over large regions just prior to the abrupt warmings over Greenland. Abrupt changes in the sea ice cover thus have been important for creating the subsequent atmospheric changes.

The results support theories that have suggested that the sea ice cover changes were critical for the abrupt changes. Sadatzki´s work provides unprecedented proxy evidence of expansion and retreat of sea ice in the glacial Nordic Seas, contributing to an improved understanding of the role of sea ice changes in abrupt climate change in the past, and with relevance for the ongoing sea ice reduction in the Arctic today. The results are about to be published in leading international journals.