Mari F jensen successfully defended her PhD thesis 1st of december -2017 on “Abrupt changes in sea ice and dynamics of Dansgaard-Oeschger events”. Mari is the second ice2ice Phd to finish her studies. Luckily Mari has decided to continue in Science, a great benefit to all of us and the ice2ice objectives. Through her Phd Mari has published 1 peer reviewed article and submitted another two, that all form part of her thesis. You can read and download the thesis here.

The subject of Maris thesis has been to study the dynamics of Dansgaard Oeschger events. Changes in sea ice are proposed as an important component in Dansgaard-Oeschger events; the abrupt climate change events that occurred repeatedly during the last ice age. Paleoclimatic reconstructions suggest an expansion of sea ice in the Nordic Seas during the cold stadial periods of the Dansgaard-Oeschger cycles. However, as the present configuration of the Nordic Seas does not allow for an extensive sea-ice cover in this region, the hydrography must have been different during glacial times. In fact, reconstructions show that the Nordic Seas hydrography during cold stadial periods was similar to the stratification of the Arctic Ocean today. However, the dynamic impacts of changing freshwater input and Atlantic water temperature on the Arctic stratification and sea ice are unclear. 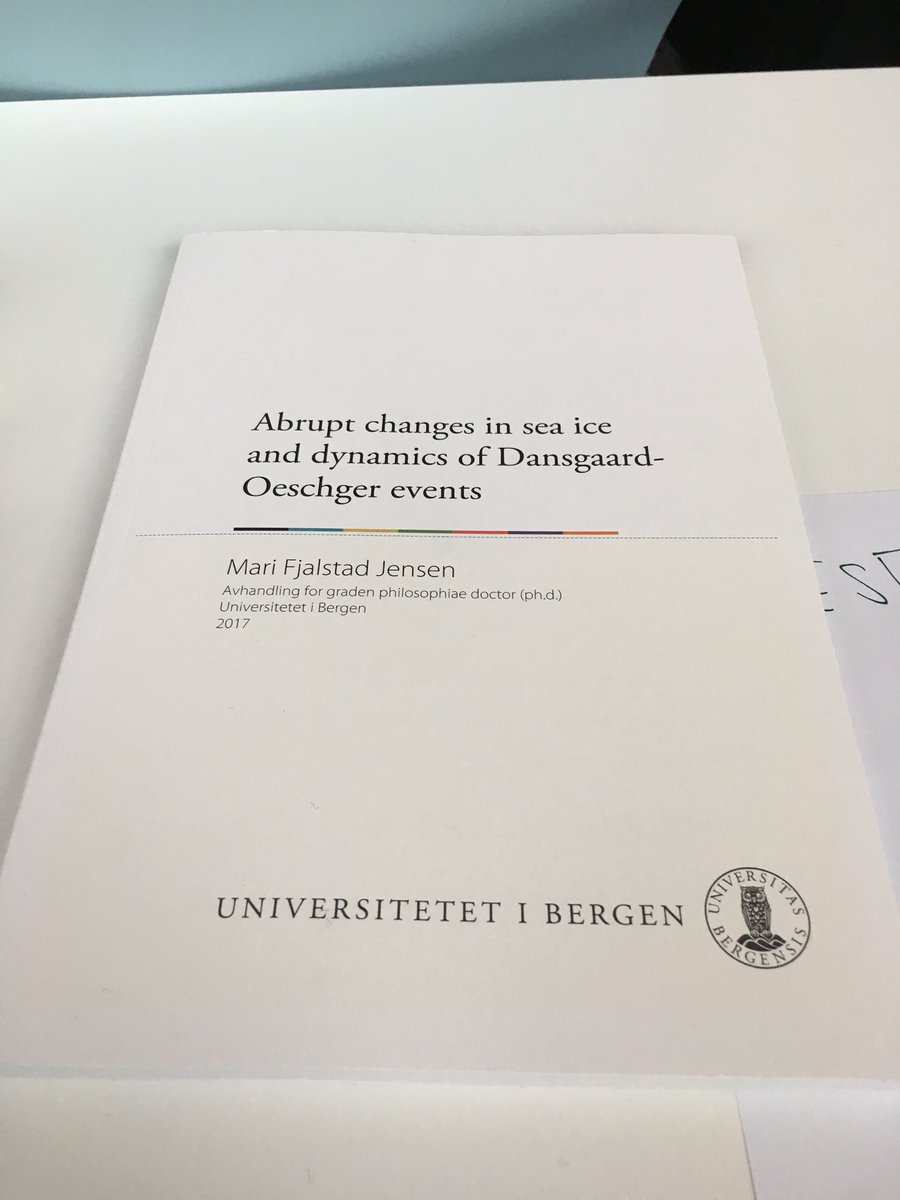 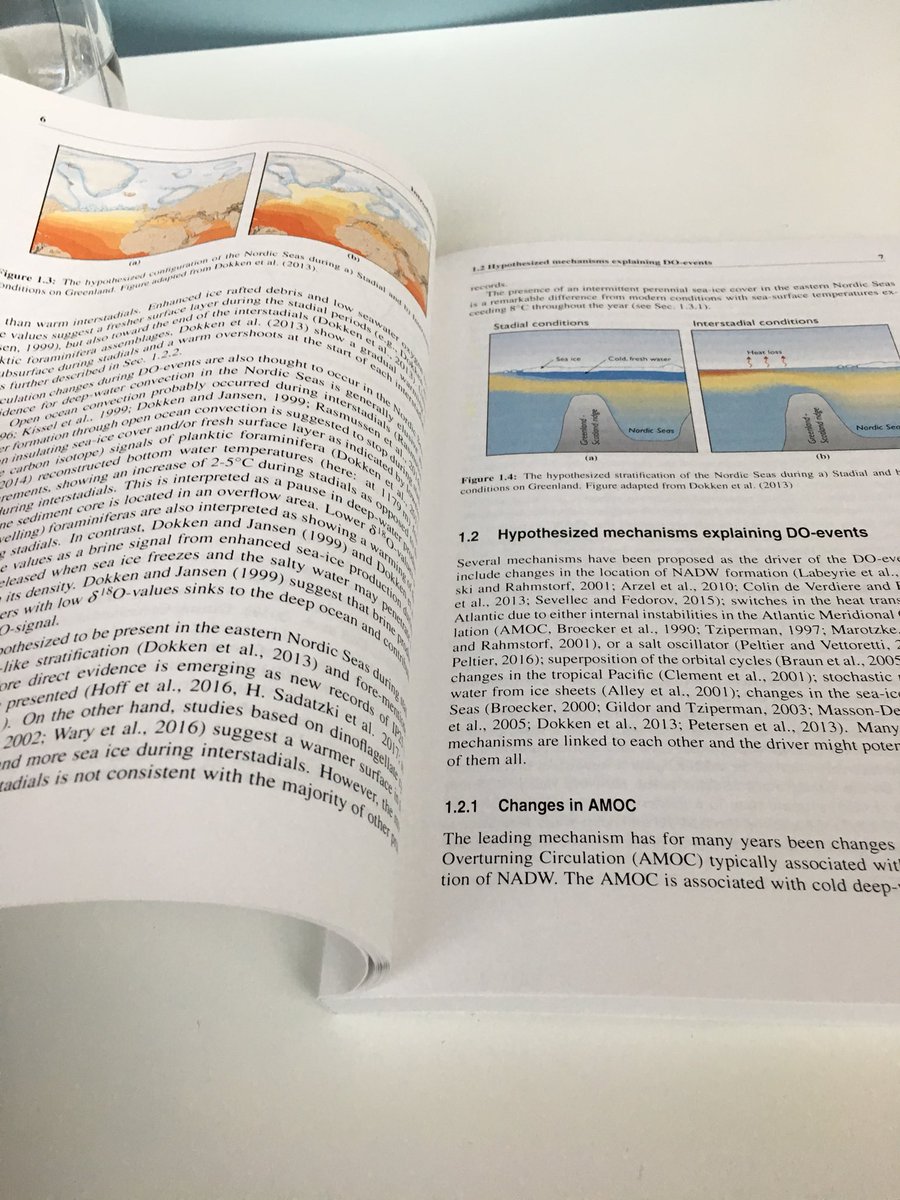 Maris study aimed to assess the potential for Arctic-like stratification in the Nordic Seas during the last glacial period and the dynamics behind Dansgaard-Oeschger events, using models and theory. The results are presented in three papers.

In the first paper, she and co-authors developed a simple conceptual two-layer ocean model including sea ice representing the Nordic Seas during stadial times. Here, they find that the sea-ice cover is sensitive to changes in freshwater input, subsurface temperature, and the representation of vertical mixing. Abrupt changes in sea ice can occur with small changes to surface freshwater supply or Atlantic water temperatures. You can read the full paper here.

In the second paper we apply a three-dimensional eddy resolving numerical model to the same problem and find further support for the conclusions from the first paper; the stability of a sea-ice cover in the Nordic Seas is dependent on the background climate and large changes in stratification and sea ice occur with small changes in forcing. In addition, additional results presented in this dissertation show self-sustained oscillations in sea-ice cover without a change in forcing. From the second paper, it was shown that an extensive sea-ice cover and an Arctic-like stratification with a fresh surface layer and a halocline can exist in the Nordic Seas without an external freshwater supply. Under sufficient cold conditions, a halocline capped by sea ice emerges spontaneously due to redistribution of freshwater through sea-ice formation and melt. Further it was shown that an extensive sea-ice cover slows down the local overturning in the Nordic Seas; decreases the heat import to the basin; warms intermediate waters, and cools deep waters. The paper is under review.

In the third paper, the importance of background climate is further stressed. In this study, rather than studying an Arctic-like stratification, the focus is on sea-surface temperature variability in the region of the Nordic Seas and North Atlantic. Mari and co-authors compile all available planktic foraminifera records from the North Atlantic during Dansgaard-Oeschger events with a sea-surface temperature reconstruction. These are then combined with fully coupled climate model simulations using a proxy surrogate reconstruction method. The resulting spatial sea-surface temperature patterns agree over a number of different general circulation models and simulations. However, freshwater forced runs from glacial times are needed to capture the amplitude of the temperature variability as seen in the proxy records. They suggest that sea-ice changes are important in extending the oceanic temperature signals to land. You can read the submitted paper here.

Combined, the three papers argue for an important role of the Nordic Seas during DansgaardOeschger events, consistent with paleoclimatic reconstructions. Maris results are also relevant for understanding potential future changes in Arctic sea-ice cover, and we argue that changes in Atlantic water temperature are of large importance.